In the far east of Russia, situated between the Okhtsk Sea to the West and the Bering Sea to the east, the Kamchatka Peninsula is a remote and isolated land that is the size of Germany, Austria and Switzerland combined with a population of just 377,900 - 250,000 of whom live in the capital Petropavlovsk. The scope for heli skiing in Kamchatka's vast unexplored wilderness is mind-blowing.

At 4,750 metres, Klyuchevskaya Sopka is the highest of the peninsula's 200 volcanoes, 29 of which are active - making it the greatest concentration of active volcanoes anywhere on earth.

Its low population density, few roads and lack of large-scale development have left the vast majority of the Kamchatka peninsula untainted by human hands and it is now globally recognised as an area of highly significant biodiversity.

The scenery in Kamchatka is like nothing on this earth and at times so dramatic that it is impossible not to stop every couple of turns and gaze in amazement. The terrain is extremely varied from one area to another with some good tree skiing at lower elevations, big volcanic faces, long steep couloirs, wide open bowls, and long, mellow cruisers.

Kamchatka was AMAZING. The terrain is unbelievable with those vast views dotted by smouldering volcanoes. And to actually ski into a live volcano has to be one of the most amazing things I have done.

The Most Unique Experience on Skis

In 25 years of searching the world for the most incredible ski and snowboard experiences nothing we have found (yet) comes close to the ‘other worldly’ experience of ‘Planet Kamchatka’. There are no words to describe the contrast, unfathomable size and raw power that are witnessed here on a daily basis.

Skiing to the beach, from the summit of smoking volcanos, down to pristine hot springs at sunset, barbecuing on rivers of molten lava, racing 650 kg Kamchatka brown bears down the mountain. To have just one of these experiences in a lifetime would be special…to have them multiple times on a daily basis is sensory overload.

Long, long runs. With big vertical rises coming straight from sea level there are some incredibly long runs in Kamchatka.

Once you leave the grim streets of Petropavlosk you are instrantly transported to a genuinely wild, untouched and unexplored paradise. 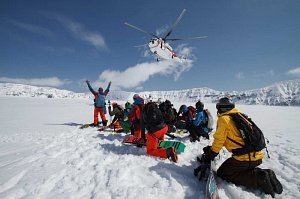 A more distant, end of the earth type place would be hard to imagine and for the past four years I had dreamed of skiing these gigantic volcanoes that rise so abruptly from the mythical sounding, Sea of Okhotsk.

Rob Penn, Financial Times How to Spend it, February 2007

Do not go where the path may lead, go instead where there is no path and leave a trail.