This truly vast expanse of wilderness on the Alaskan frontier offers an incomparable amount of the most sensational heli-ski terrain imaginable.

Imagine an area twenty five times the size of Les Trois Vallés in France or sixty nine times the size of all Colorado's ski resorts – reserved exclusively for you and your friends. Now imagine bowl after endless bowl, steep lines through the trees and endless glacial expanses blanketed under an average annual snowfall of twenty five metres (82 feet).

If there is one thing that distinguishes the heli-skiing here it is the reliability and consistency of the conditions combined with incredible terrain variety. Some heli ski operations emphasize almost exclusively tree skiing or alpine terrain but Last Frontier Heliskiing has it all and lots of it.

Once a rickety old service station on the Alaska Highway, Bell 2 Lodge was transformed into a new heli-ski lodge in the mid-90’s and now offers atmospheric accommodation in eight log cabins with wood burning fires.

The Largest Heli-Ski Area in Canada

At 10,100 km2 and five times the size of the average heli-ski operation in Canada Last Frontier Heliskiing’s exclusive playground dwarfs most of its rivals exclusive playground dwarfs most of its rivals. The smaller guys always tell you, “size doesn’t matter” but is that really true? Obviously the quality of the terrain is pretty key but in our experience size really can matter. Here’s why. Let’s say you are due to arrive at more modest sized heli-ski lodge and it hasn’t snowed for a week or two (it happens). In the days leading up to your arrival there have been 30-50 people skiing 10-15 runs a day every day. You can be sure that on the morning of your arrival the guides are scratching their heads trying to figure out which of their runs has the least moguls on it. Did you come heli-skiing to eat the tracks of the guy who came last week? It doesn’t happen here...

Vast quantities of light, dry powder snow bury the mountains of the Pacific Northwest. At an elevation of 1,600 m, twenty five to thirty metres of the stuff falls annually leaving a base of four metres - and often over six on the glaciers and higher elevations. To put that in perspective, Verbier in Switzerland gets between four and five metres a year….

Down Days are Rare

Minimal time is lost to poor weather. On average it is only half a day per week when Mother Nature does not allow the helicopters to fly. For most people that’s a welcome rest for tired legs. Some heli-ski operations boast endlessly about having ‘snow cat backup’. They aren't needed here.

Remote Location on The Alaska Border

With its remote location on the Alaska border you get an ‘out there’ sense of space and wilderness that you don’t get at the majority of the heli-ski operations in the southern British Columbia. It’s a bit like Alaska but with extensive tree skiing and minimal down time. 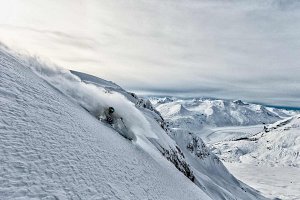 In this six part series you will get a unique insight into Last Frontier heliskiing. 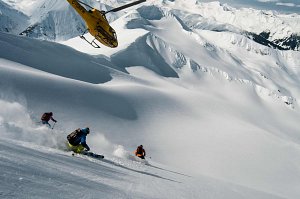 Adventure on the BC / Alaska border 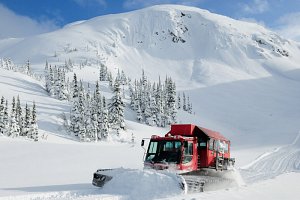 Cat Skiing Back Up - A good idea?

We often get asked whether this or that heliski lodge has ‘cat skiing backup’. If it's somewhere we send people the answer is almost certainly no. There's a good reason why...

If you wait, all that happens is you get older